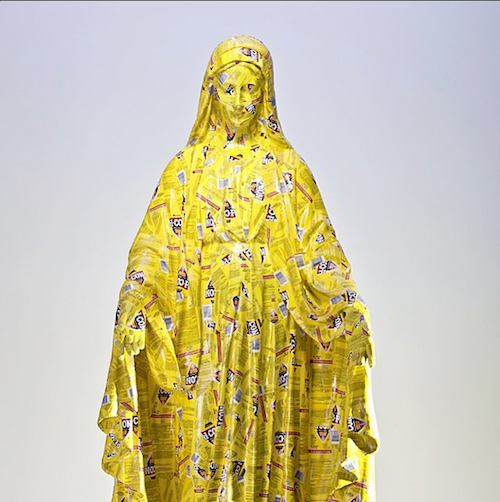 Solo(s) Project House presents an exhibition of work by artist, Jason Clay Lewis. The exhibition “Causa Mortis” will be on view from Friday, April 25th – Friday, June 27. A reception for the artist will be held on Friday, April 25 from 6-9pm.

Causa Mortis, Latin for "in anticipation of approaching death" is a juxtaposition of extremes. Good/bad, positive/negative, empathy/apathy, desire/revulsion, life/death, religion/blasphemy - distilled into binaries where are the boundaries between them? As is often the case, the greater the extreme the more powerful the metaphor. Like a gift causa mortis, we are seductively beckoned with one hand while being tempted with poison in the other. Will this gift truly solve all of our problems or is it merely another snake oil elixir that promises false hope - only to leave us devastated? What we are really being asked to contemplate is our own mortality. Among the works in the exhibition are a series of sculptures covered in d-CON rat poison packaging. By using the metaphor of poison – the artist provokes the idea of what can be considered an object of pleasure or disgust.

Jason Clay Lewis came to New York in 1991 on a scholarship and internship at Universal Limited Art Editions. From 1992 - 1994 he worked with Jasper Johns as his personal studio assistant. Continuing his education, he graduated from The Cooper Union with a Bachelor of Fine Arts in 1997. Jason has been actively showing for the last several years both nationally and internationally. His work has appeared and reviewed in publications including Art In America, World of Art, Art On Paper and ZINK Magazine. He currently lives and Works in Brooklyn, New York. 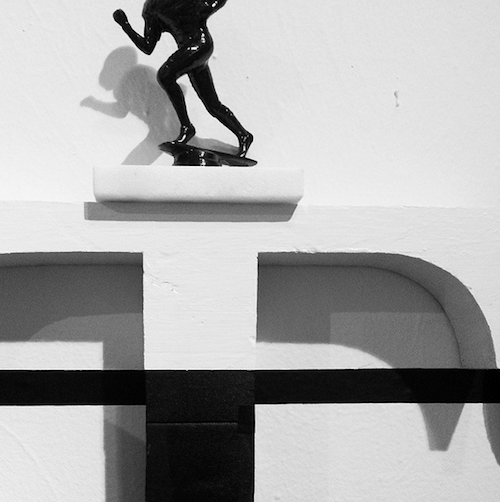 7 – 10 pm
Solo(s) Project House presents a new lobby installation by Samer Fouad. The exhibition “To Ebb and Flow” will be on view from Friday, April 25th – Friday, June 27. A reception for the artist will be held on Friday, April 25th from 7 – 11pm.

“To Ebb and Flow” is a visual narration by designer Samer Fouad. By using the softest whites on the hardest blacks, the reader is asked to address the magic between lines that others miss. Surrounded by objects, you are asked to familiarize yourself with feelings that are not so familiar. These are muscles your body forgot how to use. These are thoughts you have to find. Lines become shapes, shapes become forms, forms become familiar. It is a conversation about contrast. The story is complete.

Samer Fouad (b. 1989, New Jersey) is a graphic designer and artist based out of Newark, New Jersey. Fouad’s work has been featured in magazines and websites spanning from New York to Tokyo, specifically the AIGA, Design Sponge, Ad Week and Pantone™. Currently Director of Operations at the Newark Printshop, Fouad hopes to bring analog printing back to a digital Newark.

SPH is located at 972 Broad St. in the arts district of downtown Newark, NJ. It is free and open to the public, Wednesday - Friday, 12 pm - 6pm.
www.solosprojecthouse.com
Posted by ShamefulDesigns at 5:27 AM